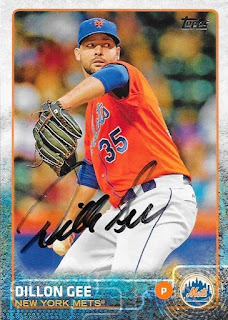 I had cards pre-scanned for this weekend while I was away for Christmas, but ended up not pulling my laptop out of my bag.  So, this is the last of what I had pre-scanned before I start showing off Christmas gifts (Mom, yours will be first).

I was excited to see that Dillon Gee was signing TTM, since I had a lot of his cards and they were in the 2010s, which are a bit harder to get done TTM (for me at least).  So, I sent off this 2015 Topps, which turned out ok.  He used a fading Sharpie, but I'll have to deal with it. 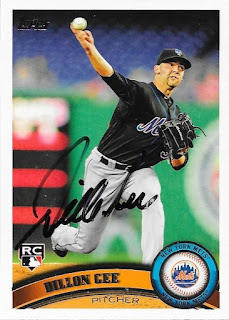 This 2011 Topps turned out better, and 11 is a set I really struggle to get stuff signed in.  I just don't have many cards from this set in bulk.

I mailed to Gee on October 31 and got the cards back on November 9, for a 9-day TAT.
Posted by William Regenthal at 10:48 AM