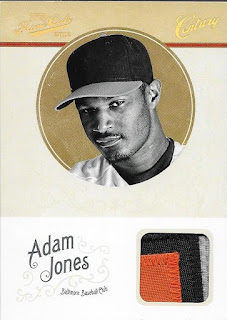 I got an amazing birthday package in the mail the other day from my good friend, Drew.  He has been one of the people that I have traded with the longest since I started this blog in November 2008.  I believe he and I met in February of 2009 and traded soon after.  That is a long time, if you think about it.

Drew always sends great stuff my way, and this time was no different.  Having recently returned from the "East Coast National", Drew found some really nice stuff.

The above card is a 2012 Panini Prime Cuts Adam Jones patch numbered 19/25.  I don't have a lot of Jones patches, so it was nice to add this one to my collection. 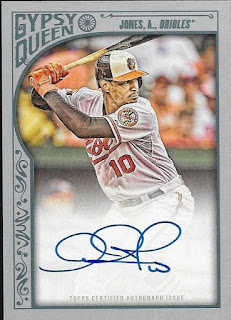 Drew also included this 2015 Gypsy Queen silver Jones auto.  This card is numbered 39/50 and the auto is on card.  Jones has a nice signature, and it really pops on this card.

Thanks so much for the gifts, Drew!
Posted by William Regenthal at 8:14 PM