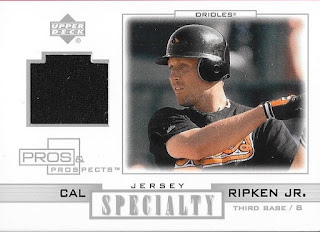 I have been really lucky in my time trading baseball cards online.  I'd say that 99.999% of all of the deals I have made since I really started trading online (in 2008) have been successful.  Very rarely have I lost or been scammed out of anything.  Right when I joined the Instagram trading community, a 12-year old kid scammed me out of a Manny Machado signed baseball, only for me to get it back after contacting his dad.

A year later, I got a surprise message in my inbox on Instagram from that very same kid.  His opening sentence of the message said "Hey, I'm the guy who scammed you out of the Manny Machado baseball..."  It turns out that after I had messaged the kid's dad (and the dad telling me that he had in fact shipped my item and that his son would have never scammed anyone), the kid came clean to his dad and told him that he did, indeed, defraud me out of the ball.  He went on to tell me that his dad had "severely" punished him, and he had learned from his error.  He also said that he had acted immaturely, and hoped that one day, I would be able to forgive him.  In the meantime, he wanted to make things right by sending me a care package, if that was ok with me.

Well, it didn't take me long to let him know that I was glad he felt the need to reach out and ask for forgiveness.  He could have avoided me on Instagram and I would have never known the difference (he has a different screen name now), yet he let me know up front who he was.  I appreciated the gesture.  I told him that no care package would be necessary, but he insisted.

He really came through.  Above is a nice Cal Ripken relic that I didn't have in my collection.  The card is a 2001 Upper Deck Pros & Prospects relic card. 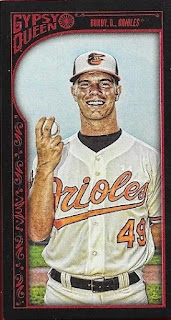 What I initially thought was just a throw in mini of Oriole Dylan Bundy really caught me by surprise. This is a 2015 Gypsy Queen black parallel numbered 3/5!  Wow. 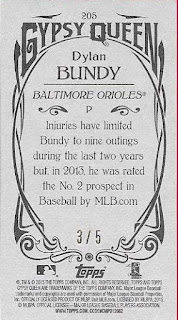 This was really unexpected.  I wish Bundy was healthy, but apparently, he has a growth (which amounts to what seems to be a new bone forming in one of his shoulder muscles) in his shoulder that had sidelined him for much of this season.  He will be out of options next year, so he must make the O's squad, or be placed on waivers.  I figure that the Orioles can make do with him, since they have been so adept lately at stashing Rule V picks on the roster.  We shall see, though.

Anyway, I was really glad that the kid reached out to me to make things right.  It was his sincerity that won me over and I am glad that I don't have anyone to think ill of in the community.  I'm hoping he can take this as a learning experience and grow from it.  It seems like he has, and I always hope for the best.
Posted by William Regenthal at 8:52 PM