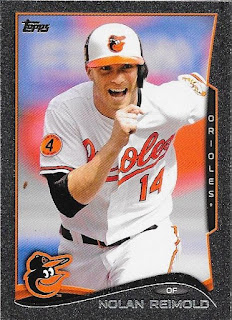 My friend, Michael, hooked me up again when he picked this Nolan Reimold 2014 Topps Mini black parallel up for me.  It had been offered to my by the same guy a couple times, but he always was catching me at a bad time.  I had been saving up for the National the first time, and the second time, I was trying to recover from the National.

It doesn't matter now, since Michael picked it up.  The card is really nice and is numbered 4/5.  I like these really low numbered cards, especially if I am able to get my hands on them.  I haven't pursued this rainbow too vigorously, since I have been concentrating on Davis, but any Reimold I can get is a good thing.

Thanks so much for not letting this card slip away from me, Michael!
Posted by William Regenthal at 11:00 PM