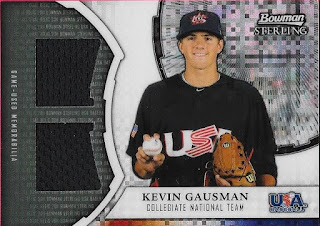 I've almost got all of the stuff written about The National that I can possibly write.  I may have two or so more posts after this one.  I have had a really hard time remembering who got me what, or where I found certain cards.  I had to send a Kik message last night to Frankie and Max in order to verify which cards I got from each of them.  We were handing each other cards left and right, and we were putting them in boxes to keep from letting them get damaged.

It was this that made The National a lot of fun.  Our group would search a table, and after a few minutes, each would say something like "Here, I thought you would like this, I just bought it."  Max and I were discussing last night about how we both realized that we had spent a good amount on money on each other.  I wouldn't have it any other way.  A lot of the cards that I bought ended up going to other people.  Some of ot was for later trades, but most of it was just care package stuff that I thought others would like.

Max really knows the types of stuff that I like, and he surprised me with some really good cards.  The above Kevin Gausman is a really cool card.  It's a 2011 Bowman Sterling numbered 185/199. 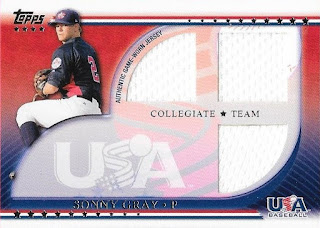 Max also helped with the Sonny Gray PC with this 3-piece relic card from from 2010 Topps USA Baseball.  This one isn't numbered, but is pretty awesome.

Thanks for everything you do, Max, and I'm glad we were able to spend the time that we did together at The National.
Posted by William Regenthal at 7:06 AM