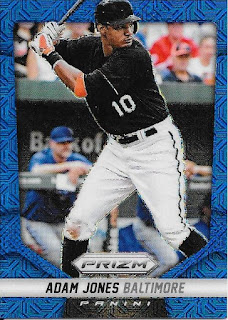 I have been doing card shows for some time now, and I have had business cards to hand out for a couple years.  I haven't really gotten much of a response from the business cards until I got a DM on Instagram from a guy named Dilan.  He said that he had picked up one of my business cards and liked my set-up at a show back in June (maybe it was May).  We got to chatting, and I remembered who he was, so we hit it off pretty well.

At the last show I did in July, he was hanging out with my buddy, Ryu, at that show, and came by my tables to say hello.  Dilan is a really cool guy, and I enjoyed chatting with him.  When Jericho passed away last month, Dilan sent me a DM with his condolences, and also wanted to tell me that he was sending me a little something.  That was so nice of him to think of me.  In the package was this really cool blue parallel from 2014 Panini Prizm of Adam Jones.  The card is numbered 44/75 and scanned really nicely.  I mean, it really looks cool on here.  Wow!  I love these different Chrome and Prizm parallels.  I hope both Panini and Topps keep this up, because I think these all look so cool. 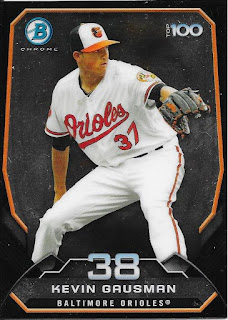 The other card in the package was this 2014 Bowman Chrome Top 100 card of Kevin Gausman.  I didn't have either card yet, and it was an awesome gesture on Dilan's part.  I look forward to the next card show (weekend of September 26) so I can chat with him again.

Thanks, Dilan!!
Posted by William Regenthal at 6:07 PM