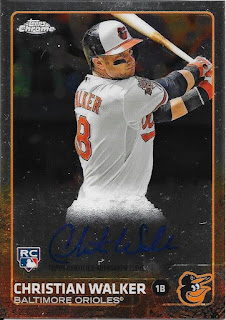 Is the 2015 trainwreck season over yet?  Holy balls, it has been brutal.  I don't see it getting any better, either, with Chris Davis being represented by Scott Boras.  I don't have any good feelings that the Orioles will grow a pair and actually sign him.

So, I guess I need to embrace the next first baseman in the minors, Christian Walker.  I actually do like Walker, having seen him in his days as a Gamecock.  I went to a few Cocks games with my younger brother who lives in South Carolina, so that gives me a good reason to follow him.

I got this 2015 Topps Chrome RC auto off of Instagram in a trade with a nice kid named Nick that I have traded with before.  We did a straight-up trade for Chrome autos.  I sent him a Corey Spangenburg auto for this Christian Walker.  Not bad at all.

Walker has had a pretty decent season at AAA Norfolk.  The playoff-bound Tides have benefited from a surging Walker.  He has 18 home runs, 136 hits and a .257 batting average this season.  From what I understand, offense comes at a premium at Harbor Park, so Walker's numbers are actually pretty good.  It looks like he will the the O's starting first baseman next year, so I need to start getting excited, right?  Mehhh, maybe in November I will be feeling it.  I'm not at this moment in time, though.  May just put a bag over my head for a while.

Thanks for the deal, Nick.  I do appreciate it.
Posted by William Regenthal at 5:11 PM