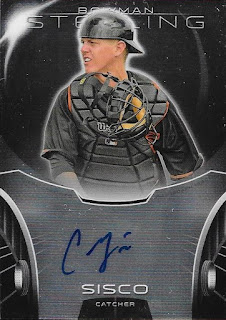 Back before I left for the National, I got a care package in the mail from my buddy, Caleb.  I sent him a bunch of Braves stuff and a relic from a Braves minor league team.  In return, he sent me this Bowman Sterling Chance Sisco auto and the below 2014 Bowman Chrome refractor auto of Jonathan Schoop.

With Matt Wieters leaving via free agency this off season, the Orioles will have to make do with Caleb Joseph and most likely Steve Clevenger until Sisco is ready for the majors.  Sisco is probably the best prospect that the O's have now, since Kevin Gausman is in the majors and Dylan Bundy has been hurt so much.

I really want to get to a minor league game to see Sisco play next season.  I missed out this year. 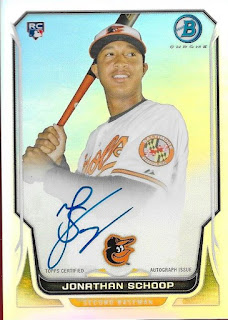 This Schoop auto is numbered 250/500.  It is a really nice-looking card.  I have quite a bit of Schoop autos and relics now, and it looks like he might just become one of my main PC targets once Chris Davis leaves Baltimore behind.  Schoop is a really good player.  I just wish he would stop attending the Adam Jones school of hitting.  He swings at so many down and away pitches, it looks like a carbon copy of a Jones at bat.

Anyway, thanks for the cards, Caleb!!
Posted by William Regenthal at 7:08 PM