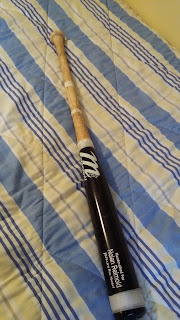 Well, another birthday passed my by on Monday.  I celebrated the day by working, going to dinner with Mal and Chris, then lounging in the recliner to watch the Orioles beat the Red Sox.  It honestly was a rather mundane day.  However, the birthday presents have begun to roll in from some of my blogger and Instagram friends.  I had gotten early presents from my mom that I showed on here a few months ago (1954 Jackie Robinson and 1960 Mickey Mantle), and my wife bought me a jumbo box of 2015 Bowman Chrome.

The first gift package that I got was from my buddy, Michael.  He picked up the above Nolan Reimold broken SHATTERED bat that had been used on 2013 Opening Day.  Michael had to surgically repair the bat, as can be seen from the medical tape all along it.  Had he not done that, he would have had to ship it in a bag.

The bat is amazing.  I'm hoping Nolan is at Fan Fest (in December, what's up with that?), so I can get the bat signed.  It would look really cool. 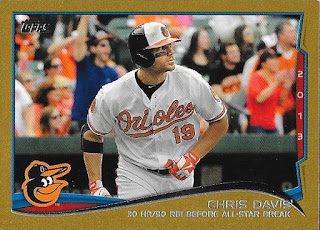 Michael also had a surprise Ebay package sent my way that had this 2014 Topps Mini gold parallel for my Chris Davis rainbow.  The card is numbered 35/63.  I recently was looking at the rainbow and embarrassed myself when I realized that I have all of these color parallels, but I don't have the BASE CARD!  How did I manage that?

Anyway, I really appreciate the thoughtfulness that Michael showed in these gifts.  There is no way I can match it with his gift that I have for his birthday (Sept. 24), but I did get him something pretty cool.

Thanks so much Michael!
Posted by William Regenthal at 6:07 PM