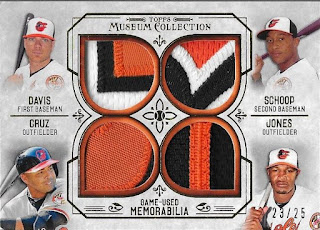 I was contacted a while ago by a kid on Instagram who had this quad patch card available.  I really wanted it, but I had been saving for The National, and was doing a really good job of sticking to my plan, and not spending a lot on cards.  I had thought it was long gone when I returned from my vacation, and didn't think anything else about it, until I got a DM the other day from him saying it was still available.

He even knocked his price down because he felt that the card belonged in my collection, and no one else's.  That in itself told me that I had better find a way to pick it up.  He had held onto the card for several months, just so I would still have a chance at it.  That really meant a lot to me.

As you can see, each relic on the card is a patch, which is really nice.  They aren't any of the off the wall patches like last year's Museum Collection had.  That's ok though, the orange really works on this card.

The card is numbered 23/25 and features Jones, Cruz, Schoop and Davis.  I really like it and I'm glad that I was finally able to pick it up.
Posted by William Regenthal at 1:03 PM