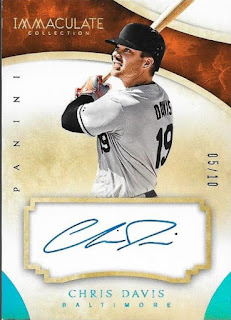 I got a DM on Instagram a few days ago from a guy who I have followed for a long time, and he has followed me.  I don't recall that we have done any deals, and if we have it may have been only one.  However, he messaged me out of the blue asking me for my address.  I gave it to him, and thanked him.  His response?  "Why are you thanking me?  I haven't done anything."

So, when the unsolicited package came in, I took a picture of the card and sent him a DM asking if this was his doing.  His response?  "I don't know what you're talking about.  Btw, Happy Birthday!"

That was a really cool gesture, which will not be forgotten.  The guy's name is Dylan and he sent me this amazing Chris Davis 2014 Panini Immaculate Collection auto numbered 5/10.  A really awesome card that I was not expecting.

Thanks so much for the gift, Dylan.
Posted by William Regenthal at 5:16 PM