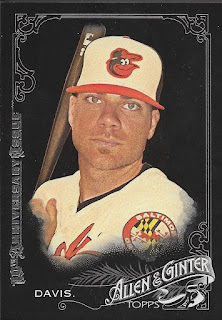 Chris Davis's days as an Oriole are coming to a close.  Barring a mirable, he will most likely sign elsewhere in the offseason.  So, I am enjoying him as an Oriole while I can and am picking up as much of his stuff as I am able.  I will not part with my Davis PC when/if he leaves, but I don't think I will pursue his stuff with other teams with as much vigor as I have his Orioles stuff.

I got this 2015 Ginter X black parallel off of Ebay for $3.00 recently, and like the Apollo Creed, it looks really awesome.  I honestly don't know why they haven't done different color parallels for Ginter until now.  Imagine what some other colors would look like.  They would be pretty appealing, I think.
Posted by William Regenthal at 10:19 PM