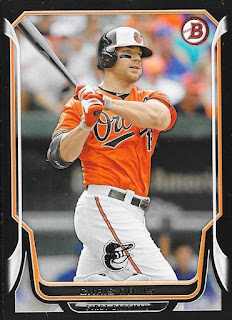 I sold a couple cards on my COMC page recently, so I was able to pick up some Chris Davis Bowman and Bowman Chrome parallels that I hadn't otherwise been able to find on Ebay (and also one other that I saw really cheap).

First is this black paper parallel numbered 16/25.  I had been watching this one of COMC for a while, but I had been hoping I could find a cheaper one on EBay.  No luck there, so COMC was used to knock it off of the list. 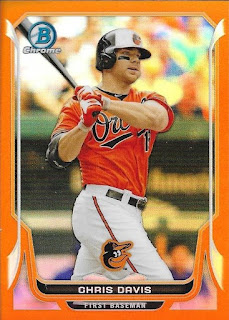 Here is Chrome's counterpart to the black paper parallel.  Numbered 9/25, this orange parallel looks really cool in person.  This one had a pretty high price tag for what it was numbered to, but in the end, I pretty much traded some stuff for it, if that's how you look at COMC. 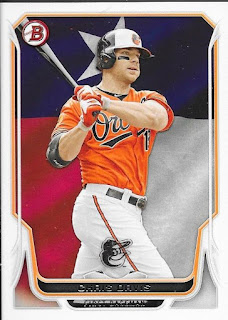 Finally, I had completely overlooked the hometown flags parallel, so I added it to my COMC card and rounded out my order.

I have almost all of the Davis parallels from 2014 Bowman.  The only one I can think of that I need off the top of my head is the 1/1 superfractor from Chrome and the 1/1 white ice from Bowman paper.  I'm probably missing one or two others.  One of these days, I will complete a rainbow.  Fingers crossed.
Posted by William Regenthal at 5:51 PM