I did a google search recently to try to find out what the first "game used relic card" was.  I read a few threads that said that Donruss first issued a jersey card in 1997.  I thought I had read somewhere that Upper Deck issued some in 1996.  I can't seem to find where I read it, but I do recall seeing it somewhere, or at least discussing it with someone.

That being said, something did pop up in the search that interested me.  I found a very early "game used" card of Cal Ripken that I was certain that I didn't own.  The card was a 1996 Fleer Ultra Diamond Dust card.  The significance of the card is that is contains dirt from Camden Yards that was collected following the 1995 season, when Cal broke Lou Gehrig's consecutive games record.  Initially, I thought I was buying the card, and the certificates, etc were extras.  I didn't know that the card was a smallish booklet (about the size of two 4 x 6 photos together.

The card is really cool, I just won't have a top loader for it, which is fine, I have somewhere to display it. 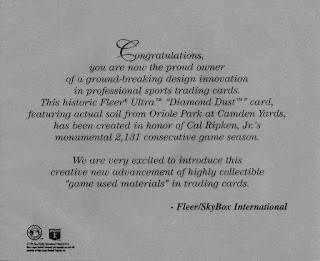 Also included was this COA from Fleer/Skybox.  This was nice to get as well.  Apparently, the dirt was obtained directly from the Orioles head groundskeeper at the time.  It is hand numbered 463/2131.  When I saw it, and the fact that I could get it at a really good price, I decided to buy it for myself for my birthday. Turns out, and I hadn't even considered it, but my birthday wasn't too long after the 20th anniversary of Cal breaking Lou's record.  Nice way to celebrate.
Posted by William Regenthal at 6:08 PM