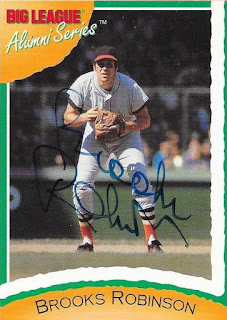 I made a deal with a guy from Instagram recently that involved a 1948 Bowman Marty Marion RC that I found at a card show for a really good price.  When I picked mine up for my '48 set, I had gotten a message from a guy with the instagram screen name green68camaro (which sounds awesome in itself).  He was from South Carolina, around where Marion was from, and wanted me to let him know if I saw any others.  Fast-forward to a couple card shows ago, and I found him a great one for only $15.

I bought it, he paid me, and I sent it on its way.  I got a message a few days later when he got the card apologizing because he only paid me what I paid for the card.  He had forgotten shipping cost.  It wasn't a big deal to me, but he said he would make it up to me.

Well, I got a letter from him and this card was inside.  This is a 1996 Big League Chew Brooks Robinson auto.  The funny thing about this card, though, was that I got one as a throw-in when I bought my 1992 Donruss Elite Cal Ripken auto.  So, in order to keep the one this guy sent me, I let him know that I was going to pay forward his kindness, and send my Brooks auto to someone else for free.  I sent mine to my new friend, Brian, that I met at my last card show.

This is a really cool card, and I'm glad to finally have one.  I love my Brooks autograph collection, and it seems like I have a ton.

Thanks for the deal!
Posted by William Regenthal at 7:03 PM