In Person Care Package From Andrew 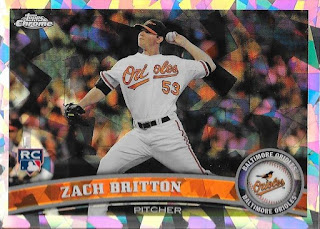 While I was at the National, I was able to save on shipping and distribute some cards to my friends Max and Andrew.  Andrew gave me a team bag full of cards that he had picked up in the months leading up to the National.  In the bag were cards that were just as nice, or better, than anything I found for my PCs at the show,

This 2011 Topps Chrome Atomic or Prism refractor of Zach Britton is numbered 10/225.  The scan really picked up on the prism effect, which looks really cool.  I thought the atomic refractors were numbered to 10 or 5, so this may have another name.  Still, the card is awesome. 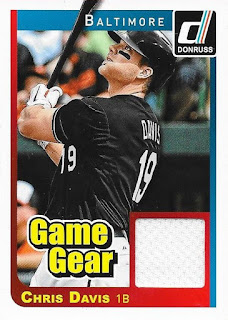 I didn't have this 2014 Donruss Chris Davis relic in my collection yet, so it was really nice to pull it out of the team bag.  The scan did really well on this card, so that's cool.  Davis seems to be heating up again.  I'm hoping he can end the season with more than 40 homers and more than 100 RBI.  It is well within reach, so that would be cool.  It would be even better if the Orioles would come off of some money and sign the man. 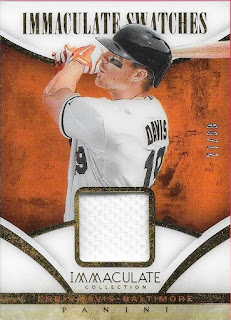 I'm always a fan of Panini Immaculate, and this card is no exception.  Numbered 77/99, it looks really sharp.  I like the almost acetate feel to the face of the card, almost like it is layered.  It looks really great in person. 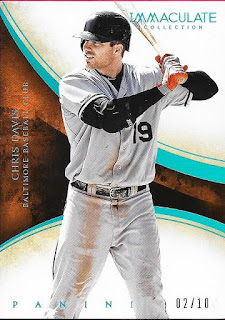 This 2/10 Immaculate of Davis is another really nice card that Andrew gave me.  This one is just as thick as the previous relic card, and looks really nice.  It doesn't have the same acetate feel, this is typical cardboard, but still a great card.  Panini really does do a good job on their products. 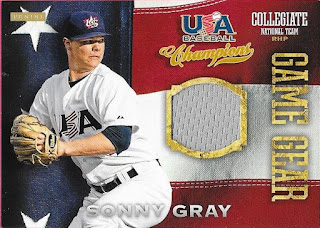 Andrew felt bad that I completed a trade with another guy on Instagram, only to receive a damaged card.  So, he took it upon himself to send me a better version, and here it is.  I can't explain it, but I really like Sonny Gray.  I would like him even more if Billy Beane would trade him to the Orioles.  He just might be the Ace that they need for a long time.  I doubt that happens, but you never know.  Still, Gray is a stud, and I have a pretty decent collection growing. 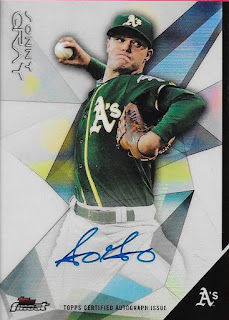 Adding to that is this awesome 2015 Finest Gray auto.  I have a few Gray autos now, but this Finest ranks near the top.  The auto is on-card, and looks really good.

Thanks so much for the cards, Andrew!
Posted by William Regenthal at 6:50 PM