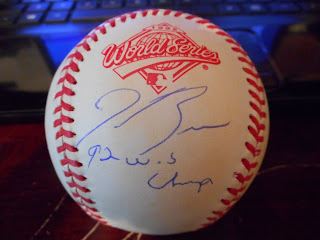 The last free VIP signer that I had a special baseball for was Derek Bell.  Known mostly for his time on the Astros, I had forgotten that he was a member of the 1992 Blue Jays team that won the World Series.  Max and I Skyped a few weeks before the show, and the two of us picked up some 1992 World Series baseballs.  I think the signature turned out really well.  I'm glad I figured out that it is better to get these baseballs signed on the side panel, as opposed to the sweet spot like I did the specialty balls I got signed at Orioles Fan Fest in February.  I'll be doing more like this in the future. 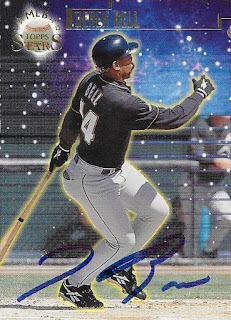 We had extra wild card vouchers so we got some cards signed as well.  I found a bunch of Bell's cards in some boxes, but forgot them as I left on my trip, so I found a bunch in some dime boxes at the show for our group.  I think this one turned out pretty nice, as well.