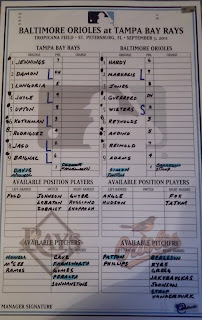 I completed a trade a while back with my buddy, Trevor where I sent him a few Reds autos and some Reds singles for this lineup card from the Rays-Orioles game from September 3, 2011.  The Orioles lost the game 6-3 due to poor starting pitching from Alfredo Simon.  Nick Markakis hit a 2-run homer that accounted for most of the scoring.

I think it is really cool that Trevor picked up the lineup card.  Even though it is from a game that the O's lost, it still is nice.  I almost forgot the Vlad Guerrero played for the Orioles.  Also, it is kind of weird to see JJ Hardy batting leadoff.  The bench and bullpen were also pretty barren.  I thought about it for a minute then realized that Chris Davis is missing from this lineup card.  He was traded to the Orioles at the trading deadline.  A simple search  brought up the Orioles transactions and I found that Davis was put on the DL with a right shoulder strain on August 16 of that year.  He would come off three days after this game (September 6).  The Orioles ended 2011 strong and caused the Red Sox to miss the playoffs.  The O's would go to the playoffs in two of the next four seasons.

Thanks for the deal, Trevor.  I love the lineup card!
Posted by William Regenthal at 9:59 PM