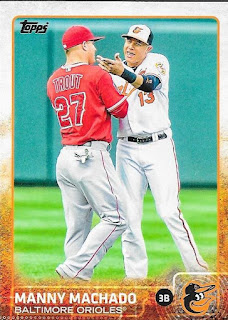 I still have a bunch of stuff from Blaine to show off, but I have been really busy lately.  Also, with the World Series starting, I will be watching that as well.  I'm still trying to post every day, but I haven't had much time to get the posts done.

I got four short prints from Blaine, two of which I have scanned and posted here.  I was looking for the above Manny SP for a while since it came out, but I never jumped on it.  I kind of forgot about it for a while, so I was really happy that it was in the package. 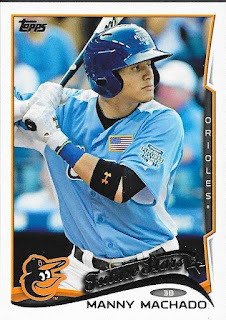 Here is the Futures Game jersey SP of Manny from 2014 Topps.  I also forgot about this card, so it was really cool to get it in the package as well.

I need to do a better job of looking up different short prints, but some of them are so hard to tell, then I give up on them.  Oh well.

By the way, the other two SPs were Dylan Bundys.  One of them was one I had, but the other was needed.

Thanks for hooking me up with these, Blaine!
Posted by William Regenthal at 10:02 PM