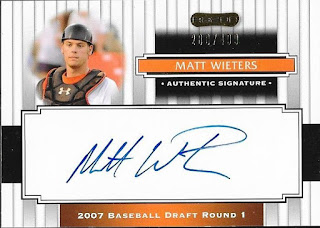 Finally, I have reached the end of the package I got from my friend, Blaine.  Like I said in the previous posts, he sent me a ton of stuff; pretty much his entire Orioles collection.  He sent me a bunch of autos that I needed for my collection, starting with the above 2008 Razor auto of Matt Wieters.  Wieters signed an exclusive deal with Razor back then, and shortly thereafter, Razor disappeared.  I haven't seen Wieters on any Topps products, so I think his exclusive deal still stands, but he has been on some UD products since then.  I'm not sure what the deal is, but it kind of sucks that he has no Topps products at all. 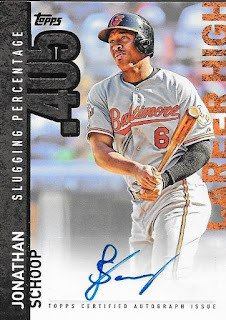 Here is another Jonathan Schoop auto for my collection.  Schoop is a really good player, and his autos are still very affordable.  I grabbed a bunch for real cheap at The National, so my Schoop PC looks pretty good so far. 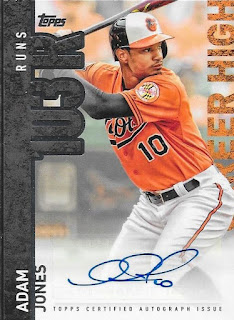 This 2015 Topps Career High auto of Adam Jones is another card that I didn't have in the collection.  Jones's stuff is a bit higher than Schoop, so I tend to shy away from his autos.  So, when I was able to add these to my collection via this deal, I was really happy. 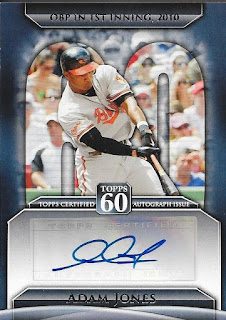 Finally, here is another Jones auto, this time from 2011 Topps 60.  You can see some subtle changes in the Jones signature between this card and the 2015 mentioned above.

Jones is one of the few Orioles that I haven't met, yet.  I hope to take care of that at this year's Fan Fest.  Maybe I will get him on an All Star ball, or something.  We'll see.

So, that about wraps up my huge deal with Blaine.  I feel bad to take his PC from him, but he made me a great offer that I couldn't refuse.  I hope he gets back into collecting, though.  He had a bunch of great vintage that I would hate to see him part with.
Posted by William Regenthal at 6:32 PM