A Look At The Last Royals World Series Winner 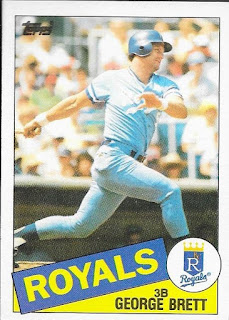 It was the year that Marty McFly departed from to explore the past, and then in the sequel, leapt to the future.  Ronald Reagan was president.  The Cold War was still going on.  I was in Kindergarten.  The Royals won their first (and only) World Series in 1985 on the back of Hall of Famer, George Brett.  They would finish the regular season with a record of 91-71, tops in the AL West.  They would dispatch the Blue Jays 4-3 in the ALCS, then would make it an all Missouri World Series.

The Royals battled the Cardinals through seven games and won 4-3.  It would be another 29 years following that victory before the Royals would appear in another post season, breaking the drought last season.  We all know, now, that they advanced all the way to the World Series.

The 1985 Royals were led offensively by Brett who batted .335 with 30 homers and 112 RBI.  They also had slugger, Steve Bablboni who mashed 36 homers that season.  Brett would finish second to Don Mattingly for the AL MVP crown.  Teammates, Bret Saberhagen and Dan Quisenberry would finish 10th and 11th and Balboni finished 19th.