What A Way To End Our Trip 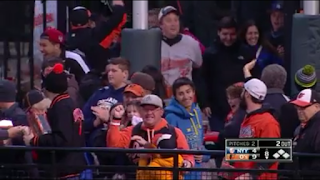 Chris told me several times this weekend that he was happy that I picked him up early from school and surprised him with a trip to Baltimore.  We enjoyed the Saturday doubleheader so much, we decided to stay for the series and season finale against the Yankees.  I'm really glad we did.  A huge selling point for me was the fact that Sunday's game could very well have been Chris Davis's last game as an Oriole, and I wanted to be in attendance.  My good friend, Michael, met up with Chris and I during the game, and before the 5th inning, we headed down to the Orioles Authentics store to be first in line for the game used baseballs from that very game.  Since I really wanted to pick up a ball from that game, I didn't move from my place in line, even though Davis came to bat while we were in there.  We watched on the TV in the shop while Davis hit his 46th home run of the season.  I was a little disappointed that I "missed" it, but I was in the stadium.

After the shop, we made our way to the flag court to watch the rest of the game, and the way it worked out was that an Oriole had to reach base, and not be taken out in a double play, for Davis to come up one more time in the game in the bottom of the 8th inning.  David Lough flew out, but then Gerardo Parra walked to bring up Manny Machado.  If Manny could avoid a double play, we would get to see Davis one more time.  Manny flew out, so with two outs, Parra on first, and the O's up 7-4, Davis came to bat one more time.

We stood at the fence on the flag court as Davis crushed a pitch over our heads for his second homer of the game.  I couldn't believe it.  Chris and I hugged, high fived, and Michael high fived as well, What I didn't realize, until a few text messages arrived, was that we could be seen pretty clearly on the MASN broadcast.  I brought up the video later on at dinner with Chris and Michael, and sure enough, the three of us can be seen celebrating Davis's homer.  The above screenshot is proof! 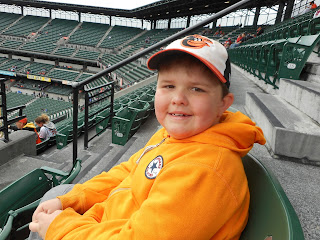 I was so glad that I decided to spend the money and take Chris on this trip.  I hate that my wife wasn't able to get off of work to come as well, but he and I had a really great bonding experience.  I let him make a lot of the decisions on the trip, and even made sure that he got his pool/hot tub time in.  He really seemed to enjoy himself, and hopefully will remember this trip for a long time. 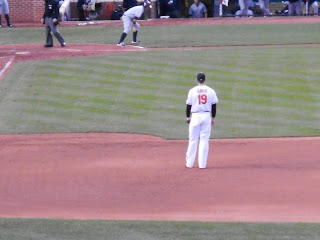 It was a little bittersweet, as a fan, though, because I know that a lot of the players that I have come to know and love will not be with the team next season.  We did our part in cheering for them, as well as giving some healthy booing to A-Roid.  I may or may not have uttered a few cuss words as Ubaldo walked a bunch of people on Saturday as well. 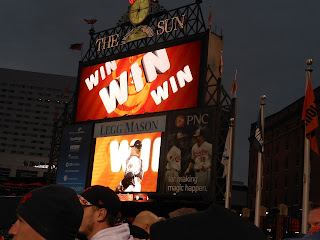 We got to see the Orioles sweep the Yankees in a three-game series, and also got to see our first doubleheader.  This was also the first entire series I have stayed for, since the one I went to (also against the Yankees) in 2005 saw the last game get rained out. 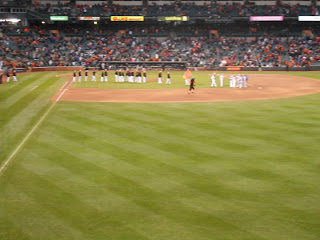 Now, we put the 2015 season behind us and look forward to 2016.  I hope I am able to go to some games next year, and also hope that some of the Orioles that are pending free agents decide to re-sign with the team.  I hope Davis does, but if not, I can say that I was at his last game as an Oriole and it sure was a memorable one!

Staying for the last game did cause a little difficulty, though, since Chris had school Monday.  He covered up in his blankets in the car as I made the mad dash home.  We stopped twice (for gas and bathroom) and got in this morning at 2:15 AM.  He was able to get up for school ok, and will not miss a day.  That is important, but I was willing to sacrifice an absence in the name of making a memory, if that needed to be the case.  Thankfully, we got home ok, and he got up for school without an issue.  I hope he and I can do another trip like this in the near future.
Posted by William Regenthal at 9:52 AM