Pickups From Our Trip 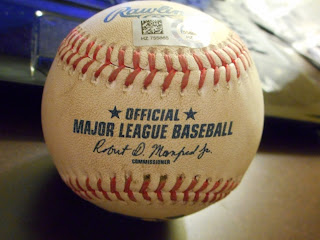 Chris and I were able to pick up a bunch of good stuff while we were in Baltimore this past weekend.  I got two game used balls; one thrown to Matt Wieters in the first game of the series, and a foul ball that Manny Machado hit in the last game.  I really wanted one from that last game, since it was Davis's last game as an Oriole.  They were $35 each, and I can type in the authentication number online and it will tell me who was pitching and who was batting, and the result of the play.  This is always really cool.  These will be put up with the other game used balls that I have. 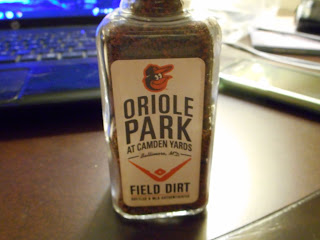 I got this cool jar of field dirt from Camden Yards, which is something I have wanted for some time now.  I paid $20 for it, which I thought was fine, but a couple drunken "experts" at the Authentics store made their point known about how stupid it would be to spend $20 on a jar of dirt.  I guess they just don't "get it." 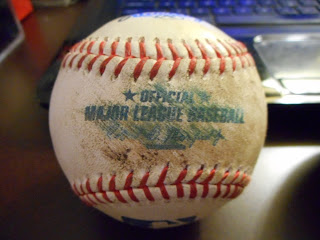 A family of Orioles fans in front of us during the second game gave Chris this foul ball hit by a Yankee during the second game.  It was hit down the line in the 5th inning, I think, which makes me think it was Brian McCann who hit it.  Not bad.  He mashed the crap out of the label, whoever hit it. 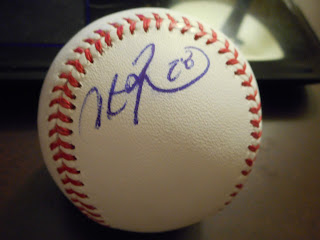 We did a little "graphing" before the first game, and both of us got Steve Pearce on OMLBs.  Not bad, since I didn't have Pearce yet. 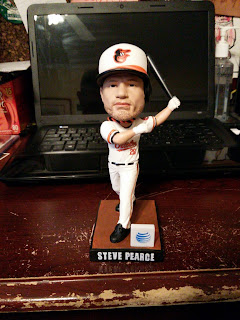 I got my Orioles knit bomber hat before the second game, and Chris got one from a group of Yankee fans who didn't want theirs.  Before the last game, I got this Steve Pearce bobblehead.  Chris really wanted one, so I tried to get one for him from the entrance, but the guy was less than courteous.  It didn't make sense that it was all fans 15 and over, when a few weeks ago it was advertised as ALL fans.  Oh well, there were plenty of Yankee fans who didn't want theirs, so Chris ended up getting one from a nice lady in Yankee gear.  See, not all Yankee fans are bad (cough cough Drew cough cough).

We had such a good time.  I just added up everything that I spent, and it was quite a bit, but it was well worth it to be able to spend time with my son.  He is at a good age to hop in the car and take somewhere.  Soon, he may not be interested in stuff like this, so I have to enjoy it while I can.
Posted by William Regenthal at 4:20 PM