A Look At The Last Blue Jays World Series Win 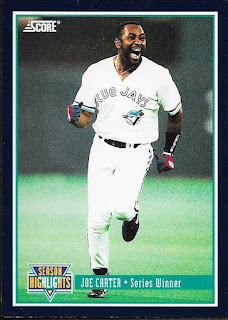 When the Jays won back to back, no team had done that since the 1977 and 78 Yankees.  The next season, no World Series would be played due to the player's strike of 1994.  The Rockies and Marlins had just begun playing that season.  Bill Clinton was in the White House.  Reggie Jackson was the only player voted into the Hall of Fame that year by the BBWAA; The Veterans Committee didn't elect anyone.

The Blue Jays 1993 roster included three Hall of Famers (Roberto Alomar, Rickey Henderson and Paul Molitor) and also their GM become a Hall of Famer (Pat Gillick).  The offense was led by John Olerud who had 200 hits, .363 batting average, 24 homers and 107 RBI.  He would finish third in the AL MVP voting behind Frank Thomas and his own teammate, Paul Molitor.  Molitor, of course, helped lead the offense as well with 211 hits, 22 homers, 111 RBI and a stout .332 batting average.  That 1993 Blue Jays lineup boasted three regulars who batted above .325.  That's pretty good.

Their starting rotation was led by Pat Hentgen who went 19-9 with a 3.87 ERA.  Their starters in general were fairly pedestrian, with only one other starter pitching to a sub-4.00 ERA.

There have not yet been any players lost from the 1993 Blue Jays team.
Posted by William Regenthal at 2:26 PM