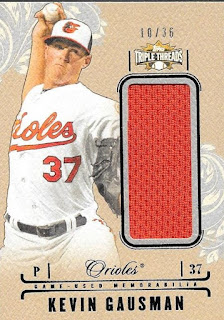 Continuing on with what I got from my friend, Blaine, here are some of the miscellaneous relic cards that were included in my package.  I don't know about you, but I really like the 2014 Triple Threads design.  The cards have what I would call a matte finish and it is really visually appealing with these cards, I think. 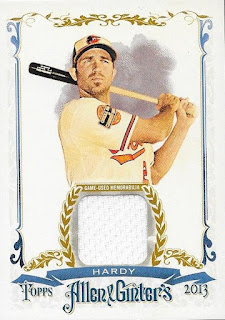 This 2013 Allen & Ginter JJ Hardy is a nice card.  I don't have a whole lot of Hardy stuff, even though I really like the player.  I just haven't really done any kind of PC with him.  He has been the backbone of the Orioles these last few years, and I am glad that he is around.  He may be declining offensively, but he is still amazing with the glove.  He fills his job well as the "field general" in Baltimore. 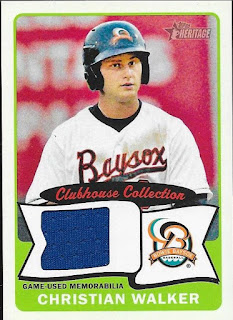 I have a relic card like this one of Christian Walker from 2014 Topps Heritage Pro Debut, but it is a different color (white, I think, but I don't remember).  This blue one was nice to find in my package from Blaine.  Walker hasn't yet caught on with the O's, but with Chris Davis's impending departure, the first base job may be his (Walker's) to take. 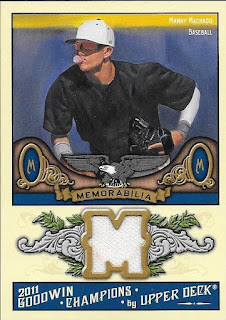 Finally, I was pretty sure I had one of these, but I need to look through my boxes to verify.  This is a 2011 Goodwin Champions Manny Machado relic.  This is one of the first relic cards issued of Manny, so this is a pretty cool piece to have.

Blaine's deal still continues to deliver.  I will close it out tomorrow by showing off the autographs that were included.
Posted by William Regenthal at 7:03 PM