A Look At The Last Cubs World Series Winner 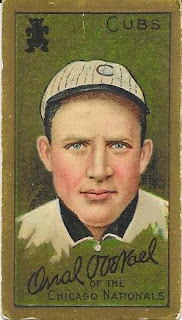 You would have to use a good bit of plutonium in the DeLorean to travel back far enough to find the most recent World Series winner for the Chicago Cubs.  You would have to travel back to a time when radios were not yet in homes and cars were not on streets.  Theodore Roosevelt was the President of the United States.  Hall of Famer Jimmie Foxx was just one year old.  The Cubs were coming off of a championship in 1907 and became the first team to win back to back.

The 1908 Cubs finished the regular season with a 99-55 record, they moved on to the World Series by winning a makeup game that was necessitated by the infamous "Merkle's Boner" game.  The Cubs took on Ty Cobb and the Detroit Tigers in a rematch from the previous year's World Series.  The Cubs won the series 4-1.

Hall of Famers from that team are Joe Tinker, Johnny Evers, Frank Chance and Three Finger Brown.
Obviously, there are no living players from the 1908 Cubs team.

The Cubs World Series record is 2-7.  They have faced the Tigers in more of the Cubs' World Series than any other team with 4.  They faced the A's and Yankees in 2 and the Red Sox in one  Will they ever win another one?
Posted by William Regenthal at 6:55 PM