A Surprise From Nolan and Jenny 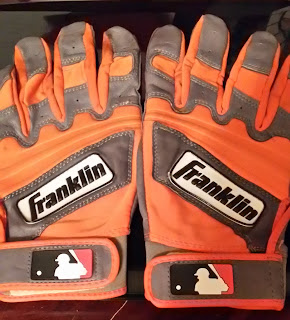 I got a message the other day from Jenny Reimold.  I had sent her and her family some extra Nolan cards that I had, figuring she, or someone in the family would want some of them.  When I saw that she had messaged me, I figured it was about the cards.  I was surprised that it was actually her asking me some questions about my collection, and also what my son's name was.  She messaged me a little later and told me that she had sent Chris and I a little something. 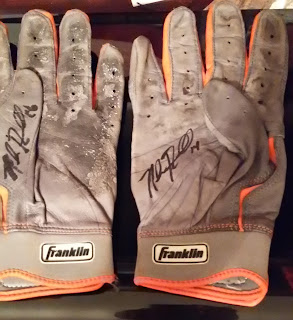 Well, a package arrived today that contained the above pair of batting gloves, as well as a couple personalized, signed post cards.  The gloves are amazing.  I love the orange.  They are signed by Nolan as well.  Chris and I really love them. 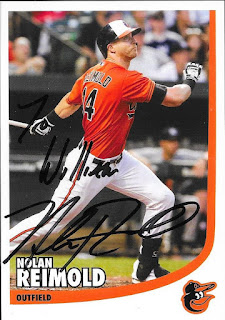 The personalized post cards are awesome, too.  Chris loves getting mail, but gets upset sometimes that most of the packages that come are for me, since I purchase a lot of cards online, or I complete a bunch of trades.  Chris gets letters here and there, mostly from his grandparents, but he doesn't really trade all that much, and he has never been on Ebay. 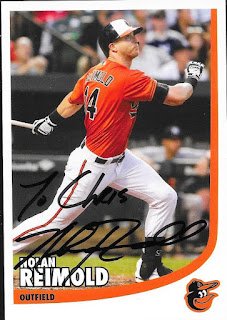 He was really excited to get something signed to him in the mail today.  I think the world of Nolan and Jenny.  They both are such awesome people.  They're really down-to-earth, and relate-able.  I think Jenny and my mom would really get along, especially if the two of them started swapping "kid stories."

Thanks so much, Nolan and Jenny for the gloves and post cards.  Chris and I love them, and can't express our thanks enough.  I hope you guys have a great offseason, and Nolan can come back to the O's next year.
Posted by William Regenthal at 9:16 PM