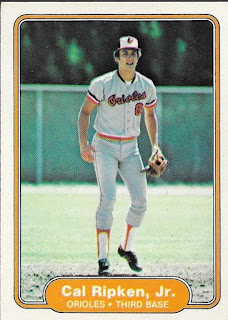 Here are some more cards that I got from my friend, Blaine, when I bought his Orioles collection.  There were the three base card rookies of Cal included, and I was glad to get them even though I already had them all.  Above is the 1982 Fleer Cal rookie, which is probably the worst of the four rookie cards that he has.  Fleer was doing their best when they got into the card industry, but those first two years (1981 and 1982) were really low-budget, and you can tell with the photography.  I'm sure Cal looks back on this card and thinks "Wow, look at all of that hair!"

Regardless, it is still a cool card.  I don't remember if this or the Donruss was the first Cal rookie that I ever got.  I know the Topps was a tough "get" back then, and the Topps Traded is still tough to find. 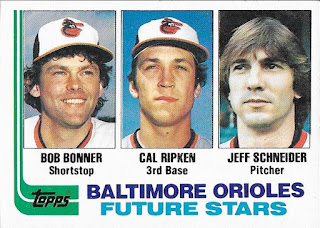 Yeah, this used to be a really tough card to get.  I remember finally getting one when I traded a bunch of wheat pennies to my brother.  Then I found one cheap at a card shop for my 1982 Topps set.  Then I got another when my mom gave me her Cal collection.  Then I got one in a $5 mystery pack at this past year's National and now I got this one out of Blaine's deal.  So, if my potato math is correct, I have five of these.  Awesome! 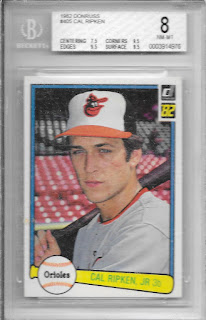 Finally, here is the Donruss version that I got from Blaine.  Now that I look it over, I believe the Donruss is the first Cal rookie that I was able to get when I was around 11 or 12 years old.  Now, I have two.  I don't usually care for graded cards, but this is pretty cool.  Also, being graded at an "8" is kind of fitting, seeing as it is Cal and all.  You know, 8 is his uniform number.  Yeah, you knew that.

So, yeah, Blaine really hooked me up on this deal.  I still have a good bit of stuff to show from the cards he sent.
Posted by William Regenthal at 2:35 PM