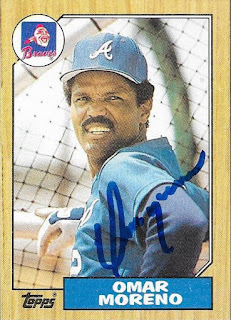 I took part in another private signing through SCN and landed this Omar Moreno signed 1987 Topps.  The problem is, though, I was supposed to have the card already.  I had sent a bunch of Moreno's stuff off last year to a former friend of mine who was to see Moreno (and a few other guys in the 87 set).  He was going to 50/50 for me, but out of the blue, he messaged me saying he was done getting card signed and quitting Instagram altogether.  I asked him if he was going to send me my stuff back, and he said he would.  I haven't heard from him since.  It is kind of sad, in my opinion.  Anyway, I got the card for my set, and can cross him off of the list.