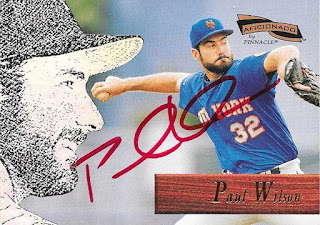 I had to wait a long, long time, but I was able to finally add a 1996 Pinnacle Aficionado to my autograph album.  This is one of my all-time favorite sets, and appears to be pretty difficult to find.  I had this card since probably 1996, then thought it might be lost forever.

I finally received it, and these cards back signed from Paul Wilson, after waiting a couple years.  The cards I sent were all really cool, and he signed them with a red Sharpie.