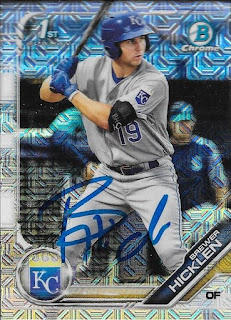 I came back from the National with some nice parallels of some teams that I knew I would see during the last month of the season.  The above Brewer Hicklen mega refractor is one of the cards I really wanted to see signed.  It turned out great! 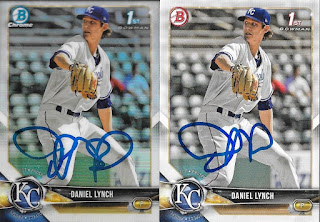 I was able to finally get Daniel Lynch on some cards.  He had been hurt the first time the Blue Rocks came through, so I wasn't sure if he would be back or not.  Luckily, he was, and signed everything I had. 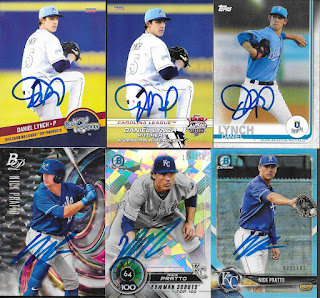 I had some really nice Nick Prattos that I got from the National.  The bottom three are some of them.  He is always super nice, even when he gets ejected!  I ended up with his broken bat, and he was cool enough to sign it after one of the games.  He had broken the bat after a called third strike, and voiced his displeasure while slamming the bat to the ground.  Kyle Isbel gave it to us at the end of the game.  Chris and I waited outside and had Pratto sign it.  He smiled as he signed it, so that was good. 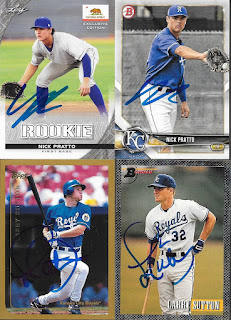 I was able to scour my boxes for a couple of Larry Sutton's cards.  I was glad to find these, but I had hoped I would have a few more. 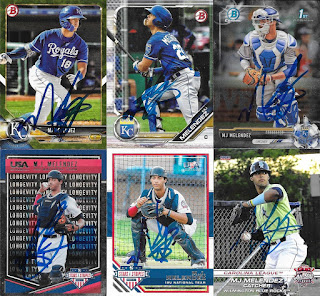 I was glad to knock some more MJ Melendez cards out.  He limits, so it took some time to get all of these done, but I was able to get some cool stuff for myself, and also some friends' 50/50s. 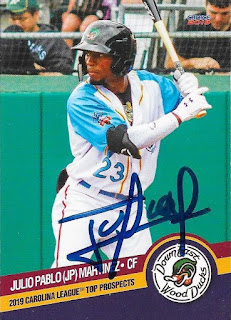 Chris helped me out with getting this JP Martinez done.  He got tougher and tougher as the season went on, but I was glad to get another card out of my box and into my album! 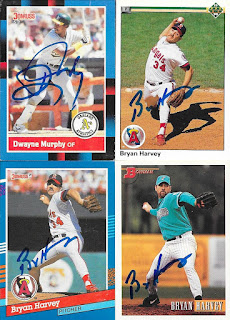 Finally, I was lucky enough to have some of the roving instructors in my autograph book that I could get to sign.  Bryan Harvey and Dwayne Murphy were both at a couple of the games, so I was able to get these cards done.
Posted by William Regenthal at 5:55 PM