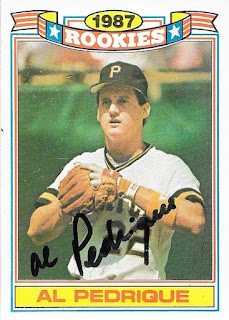 I have been spending my offseason from graphing by trying to go through my TTM box and sort it a lot better than it has been.  I also have been working to add some more subjects to my list, since I have sent to so many past players.  Still, there are guys in the box who have been there for a couple years, just waiting for their turn to get a letter and some cards from me.

I don't know how long I have had cards of Al Pedrique waiting for me to send out, but the ones I sent are pretty nice.  I really like the above 1987 Topps Glossy Rookies.  I don't think I have gotten any of these signed before, but I could have.

I also had his 1988 Fleer, 1989 Topps and a 2005 Topps that were returned signed.  He signed in black Sharpie, and the cards turned out really well.

I mailed to Pedrique on July 8 and got the cards back on September 10, for a 64-day TAT.
Posted by William Regenthal at 6:01 PM