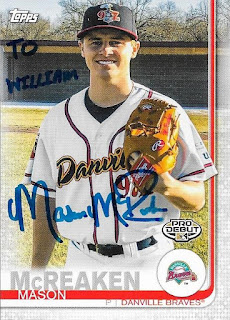 My friend, Gerard, told me that Mason McReaken was signing cards TTM at his home address, and had recently been released by the Braves.

I sent two 2019 Pro Debut cards to him to sign, and he sent them both back, one personalized, the other with just a signature.

McReaken also wrote me a letter thanking me for writing to him, and also telling me that he is working on getting the 2019 Pro Debut set signed.  So, I will have to get up with him and see his needs list and see if I can help him!

McReaken (b. 1996) played one season (2018) in the Braves system, reaching Danville of the Appalachian League (short season single A).  He went 0-1 with a 1.50 ERA in 7 games.  He was an undrafted free agent out of Southern Illinois Edwardsville.  From the back of the baseball card numbers, it looks like McReaken was doing pretty well.  I'm not sure why he was let go, but maybe if I do some trades with him, and get to know him, an appropriate time may come where I can ask that question.

I mailed to McReaken on August 14 and got the cards back on August 22, for an 8-day TAT.
Posted by William Regenthal at 5:32 PM