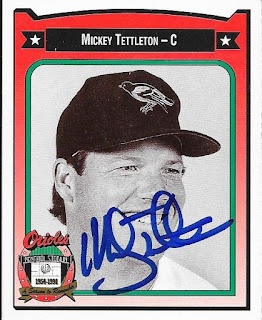 Another private signing came up on SCN; this one of former Oriole, Mickey Tettleton.  I had bought his 87 Topps already, so I went with a 1991 Crown Orioles, and the 1994 Leaf Medalists for the cards I would send. 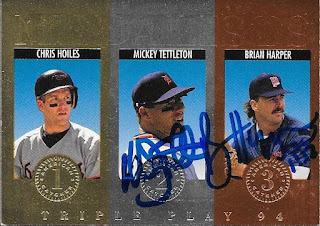 I noticed after I paid for the signing and sent my cards that I missed sending the A's Leaders card from the 87 set.  I also missed it when I sent to Carney Lansford.  I really screwed up on that one.  I'll have to hope that those two do signings again, and maybe I can finish that card.

I was happy with this 94 medalists card though.  All I need now is to catch Chris Hoiles.  I hope he is at Fan Fest, soon.