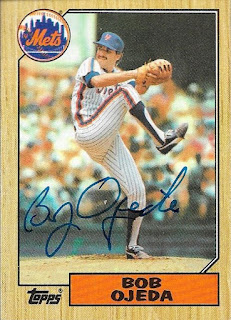 I added this Bob Ojeda auto for my 87 set through a private signing on SCN.  I have a bunch more coming, which is nice.  The set is coming along a lot better than I ever thought it would, but I have some tough ones to get still.

During Spring Training in 1993, Ojeda joined fellow Indians pitchers Tim Crews and Steve Olin on a boat ride near Crews's Florida home.  It was near dark, and Crews was legally drunk, when the boat struck a pier, killing Olin and Crews.  Ojeda received lacerations on his head, but survived the crash.  He spent most of the 1993 season recuperating from the accident.

That has to be Ojeda's greatest looking baseball card. Dang that thing looks awesome!