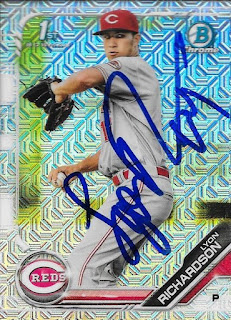 A kid named Parker saw me bust 2019 Bowman on my Instagram livestream and offered to get my Lyon Richardson cards signed.  I sent him the base card, which was the only one I had at the time, then I followed up with this Bowman Mojo refractor that I found later on in a Target Mega box. 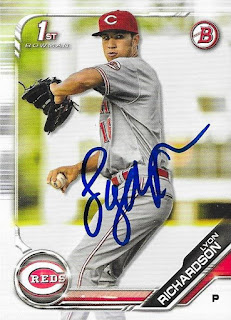 The autos came out great, but since I only had one Richardson at a time, Parker agreed to take them as a consignment instead of a 50/50.  So, I sent him a couple signed 2018 Heritage Minors autos in exchange for him getting me these two cards.

A consignment works by either trading something or paying straight up for an auto.
Posted by William Regenthal at 5:56 PM

Thank you for the explanation.