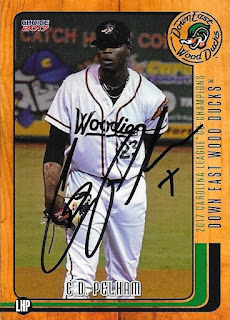 It took a while, but I got my cards back TTM from former Wood Ducks pitcher, CD Pelham.  I had heard he was singing via Spring Training by my friend, Gerard, so I sent the cards pretty early on, but they never came back.  In April, I saw CD in Nashville, and even he had no idea where they were.  It didn't matter much to me, I was more happy that he remembered Chris and I when we were in Nashville, and even gave us tickets to one of the games. 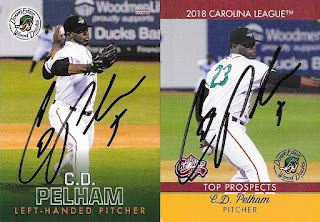 CD was a 33rd round pick in the 2015 MLB Amateur Draft out of SPartanburg Methodist College, in Spartanburg, SC.  I sure have spent plenty of time in Spartanburg, myself, between Wofford College Football games, Tommy Mauney's chassis shop and Gene Fulton's engine shop.

I mailed to Pelham on February 5 via Rangers Spring Training and got the cards back on August 30, for a 206-day TAT.  In my note, I reminded CD one more time that Jordan is better than Lebron.
Posted by William Regenthal at 5:43 PM