A Few More Autos From Gerard 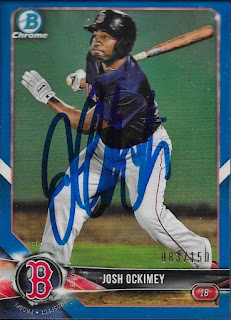 My friend, Gerard, took on a bunch more 50/50s for me this season, and I finally have gotten around to posting two of the batches that were sitting here on my desk.

I had found this 2018 Bowman Chrome blue refractor of Josh Ockimey at the National this year (I think), and it turned out really well when it was signed. 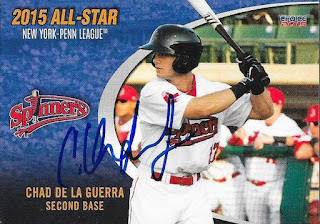 I also was surprised that I had missed this Chaf De La Guerra card from the 2015 NY-Penn League All Star game.  I have had those cards for a couple seasons, now, and have hit a wall on getting any of the remaining ones signed.  I was glad to take this one out of the box, though, and now it will be put away. 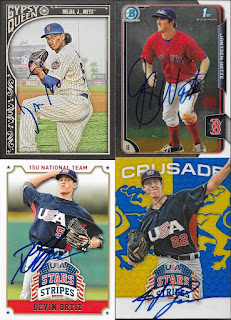 Here are some other cards that Gerard was able to take care of for me.  All of them are ones that I had for quite a while, so it is always nice to see them come back signed.

I know I have had these Jeff Niemann cards for a long time, and I was beginning to think this was a player who I wouldn't be adding any time soon.  I had looked him up fairly recently to see if he signed TTM, and he did not.  It doesn't matter, now, because these are done. 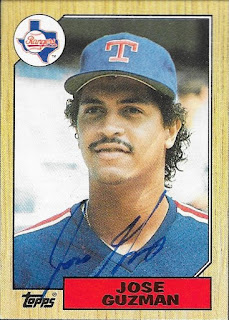 Finally, Gerard helped knock off a card from my 1987 set.  I was hoping to get Jose Guzman sooner, but it never worked out.  I have him now, and am crossing him off of the list.

Thanks for the cards, Gerard!
Posted by William Regenthal at 6:23 PM