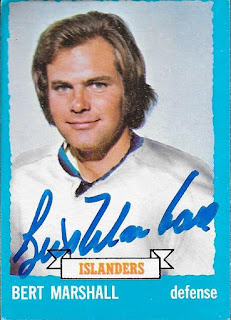 I got some more vintage hockey cards signed in this TTM success from Bert Marshall.  The cards came from my friend, Max, in a box I got off of him at the National for $10.00.  I'm really glad I got it, because otherwise, I wouldn't have had these cards, and I probably wouldn't have picked up singles on my own.  The above card is a 73-74 Topps. 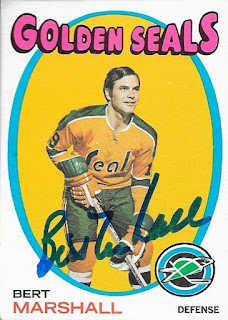 This card is a 71-72 Topps, and it also shows off the uniform and logo of the now-defunct California Golden Seals.  The Seals were part of the NHL expansion in 1967, but never really performed all that well.  They ended up moving to Cleveland in 1976.  They competed as the Cleveland Barons until 1978, and then folded.

I mailed to Marshall on August 22 and got the cards back on September 3, for a 12-day TAT.
Posted by William Regenthal at 10:20 AM