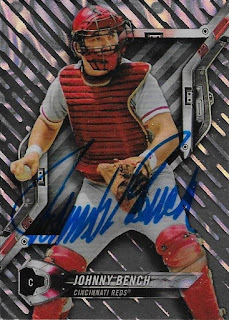 My friend Billy, who Chris and I met at the Wood Ducks games a while back, told me recently about a signing that was to take place in Wallace, NC with Hall of Famer, Johnny Bench.  The signing was going to happen at the Mad Boar restaurant in Wallace a few days before the Hope For The Heroes golf tournament.  Apparently, Bench has been coming out this way for years, and the benefit has grown.  I went ahead and searched for a ton of cards, as the lady I spoke to on the phone told me that autographs would be between $5-$10.  I knew there was no way, but from what Billy told me, the prices were very reasonable with a donation going toward the cause.  He donated a sum last year and got his items signed, so I figured I had a good chance to get a ton of stuff taken care of. 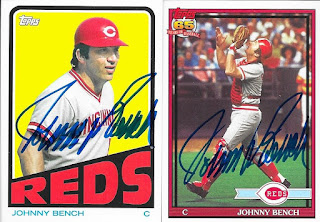 In all, I got 11 items signed by Bench, and 14 items signed by Doug Flynn for a donation of $330 to the cause.  Bench was a little surly at the start, but during the second time through the line, he had a couple more drinks in him, and he had settled down.

I made the trip with my son, Chris, and met up with my good friend, Jackson, and also Billy.  Jackson made the trip through the line with me initially and got a couple baseballs signed.  He and I went back through with his Doug Flynn cards, and a couple more baseballs, and that was when Bench had warmed up a lot more.  He offered for us to come behind the table with him and take some pictures, which made the initial surliness a distant memory. 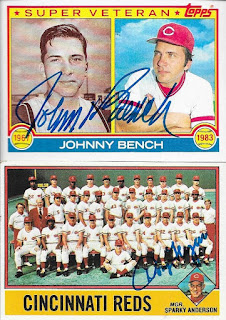 I had to raid some of my sets to have some good Topps cards for Bench to sign.  Also, I had sent most of my Flynns to someone else for graphing, so I was pretty short on his stuff.  I did get rid of a couple 1976 Topps Reds team cards, which is always a plus.  I put Flynn on those and gave one to Chris. 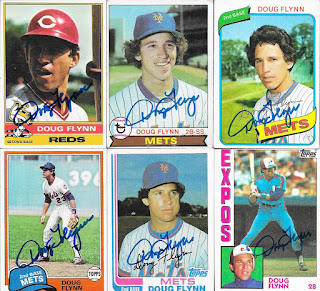 My amazingly awesome friend, Max, sent me an assortment of Flynn cards to go along with the few that I raided from my completed sets.  All of the cards turned out great, and I was glad to get everything signed.  I don't mind replacing what I robbed from the sets at a later date. 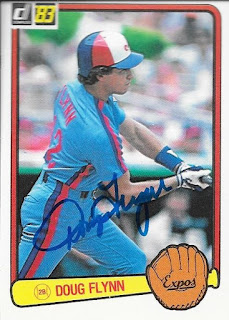 I did find a ton of 1983 Donruss Doug Flynn cards, but that was because that box is at the very bottom of my stack of 5,000-count boxes, and apparently, I was too lazy to look through it for the 50/50 I had sent off for earlier on. 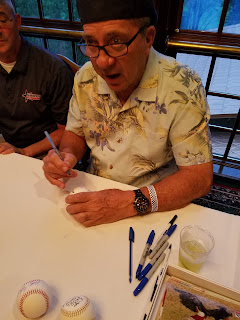 This was Surly Bench, early on.  He made a comment about how I wasn't really donating, but paying to get cards signed.  I got the point, but because I believed in the cause was why I spent so much.  If it was a donation to fund an underwater basket weaving class, I wouldn't have spent as much. 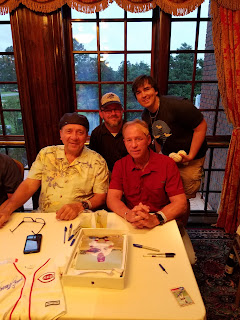 Bench was a lot happier when this photo of Jackson and I was taken with Bench and Flynn.  He really ended up being cool, and I imagine he was just trying to bust my chops early on.  I get it, and I definitely am not bothered by it anymore. 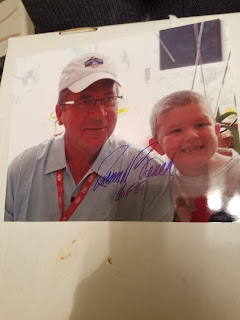 The main piece that was signed was this photo from 2013 of Chris and Bench.  Photo cred goes to old friend of the blog, the great Drew!  (Drew, time for you to come back to the blogs) 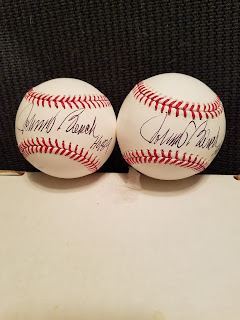 Finally, I upgraded the Bench ball in my collection with one of these, and I got an extra one done, just because.

I was happy to contribute to the Hope For The Heroes cause, and also spend some time with my son and a couple good friends.  Thanks to Billy for telling me about the event, and thanks to Jackson for making the trip.I definitely will go next year!
Posted by William Regenthal at 7:00 PM