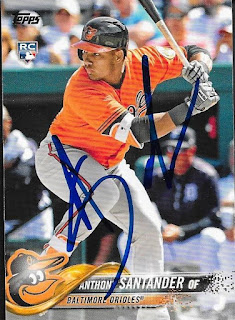 I missed out on a few players when I was in Norfolk last month.  So, while I was there, I handed off the cards I needed to my friend, Connor.  He was able to get a few of the guys that I needed, and he also threw in an extra auto, the above Anthony Santander.

I am lucky that Connor was able to get done what he did, because the guys I needed have both been DFAed by the Orioles since then.  Tom Eschelman didn't perform all that well in his time with the Orioles.  I had picked up the two cards on the left while I was at the National.  The Contenders on the right was a card I had for a long time in my box. 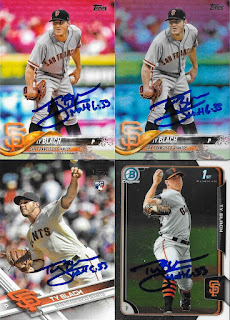 I also had these Ty Blachs that I wanted to get done, and he performed pretty poorly as well.  He was also DFAed by the Orioles, and I highly doubt he will be back.  I can't remember if these guys were released, because I went out of town soon after, but I'm pretty sure both have been.

Regardless, I feel bad for these guys.  They got a shot at the majors, and the performances really didn't pan out.  I don't know if they (Blach and Eschelman) will receive other shots, but hey, they mad it to the majors.  That is so much more than a lot of people can say.

Anyway, I am glad Connor hooked me up with these autos.  They're going into my album, and I feel like they all turned out really well.
Posted by William Regenthal at 5:34 PM