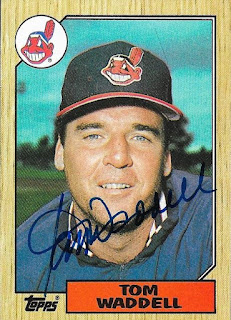 I recently saw on a Facebook group that I'm in that Tom Waddell had passed away.  I knew he was in the 87 set, since I had seen his cards recently when I was looking for some other guys for a private signing.  So, I jumped over to Ebay to see if he had any signed cards out there, and I was lucky enough to find one at a good price.  I always hate it when folks dump autos of guys when they pass in order to cash in a bit.  I felt like this one was reasonably priced, and the seller probably wasn't aware of Waddell's passing.

The comments on the post on Facebook indicate that Waddell was a great guy.  It is a shame that I wasn't able to write him while he was alive.  Life is really short.  He suffered a heart attack just days shy of his 61st birthday.

Waddell was a promising pitcher in college, whose career was derailed due to arm injuries.  By 1979, he was a clothing salesman in New York, and was playing for a semi-pro softball team.  He was informed of a tryout with the Braves, and impressed their scout enough that he was signed.  The scout?  Hank Aaron.

Waddell's journey to the majors would make for an interesting movie.
Posted by William Regenthal at 11:34 AM