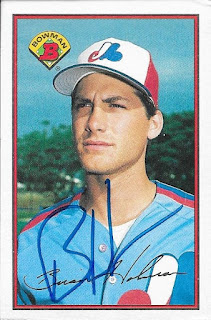 My buddy, Jackson in Arizona, sent back some more of the cards that he had gotten signed for me this summer.  He has had to send the stuff back in phases, as he has most of the stuff I sent scattered about his room. 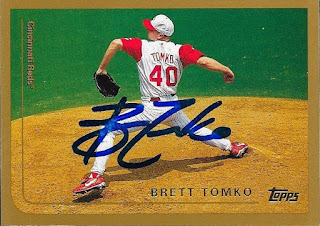 Still, some good stuff got signed, and I am really happy because of it.  Jackson hooked me up, and I was able to add a ton to my album.

I had sent to Eddie Taubensee TTM and got some cards back, but these two above weren't represented, so it was nice to get them out of my box and into the album.  The Donruss Joe Oliver might have been nice to try to get signed myself, but he had gotten really tough last year when he was a coach with Salem.  He didn't return this season, so it was a moot point. 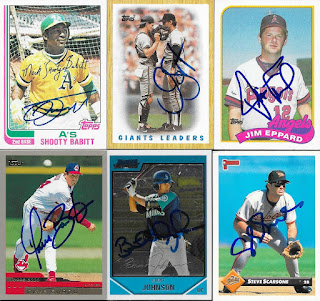 This assortment was also nice.  I was informed later that Jim Gott was not the pitcher on the Giants leaders card, even though he signed it.  I will need to send to the proper pitcher on the card.  Someone told me, but the name escapes me.

Thanks for getting these signed, Jackson!  I really appreciate it.
Posted by William Regenthal at 5:33 PM