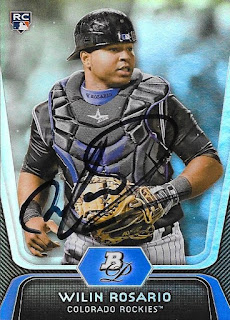 I saw that Wilin Rosario was signing TTM while he was with the Rochester Red Wings, so I found a few cards and sent them out.  A short time later, they all came back signed.  Normally, I would have had a lot of cards to choose from, but I typically give all of my Rosario stuff to my friend, Noah, so I was lucky to find these three cards.  The 2012 Bowman Platinum turned out really well. 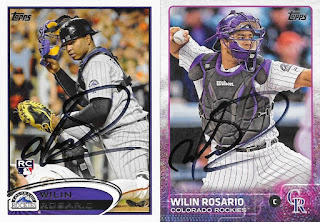 A look at his stats show that he didn't play at all between 2016 and 2018.  He played 105 games this year at AAA Rochester in the Twins system.  He had 124 hits, 24 home runs and a .300 average.  Maybe this is an indication that he is now healthy, and a team will give him a Spring Training invitation next season.