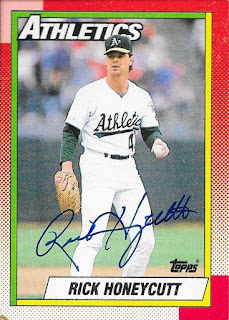 While this autograph request was out to Rick Honeycutt, I ended up getting an 87 Topps for my set.  This one finally came in, so I will take a look at the one I had, and see if this one looks any better.

I had sent to Dodgers Spring Training to try to get Honeycutt on my cards, and they finally did come back.  The above 1990 Topps turned out really well.  I didn't realize how off-centered my card was, but it still looks nice. I mailed to Honeycutt on February 5 and got the cards back on September 10, for a 217-day TAT.
Posted by William Regenthal at 11:08 PM