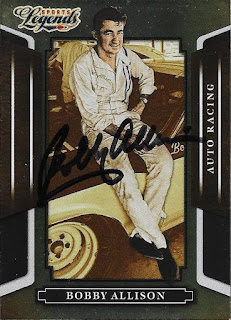 I took a couple days off from posting due to being out of town for Thanksgiving.  I'm back now, and as always, I have a ton of TTMs to show off.

I found this 2008 Donruss Legends Bobby Allison at my LCS a few weeks ago, and sent it off to see if I could get it back signed.  The card came back, along with a facsimile autoed post card.

I mailed to Allison on October 19 and got the card back on October 31, for a 12-day TAT.
Posted by William Regenthal at 8:33 PM