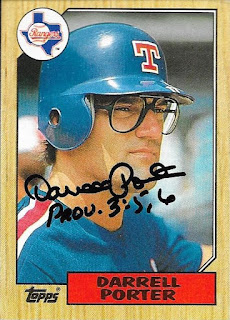 I had to buy myself a couple Christmas gifts, since my wife refused to look at my needs list and help knock cards off of my 1987 Topps set.  So, I picked up a couple cards and let her wrap them to give to me for Christmas.  Yeah, we are a bunch of weirdos.

I definitely needed Darrell Porter for my set, so when I saw this one pop up on Ebay, it made sense to go ahead and grab it.

Porter was the 1982 NLCS and World Series MVP.

On August 5, 2002, Porter was found dead outside his vehicle after it had veered off the road and became lodged onto a tree stump.  The exact details of the events leading up to his death remain unsolved, but an autopsy revealed that he died as a result of cocaine abuse.  He had a history of substance abuse, having attended rehab in 1980.
Posted by William Regenthal at 6:28 PM