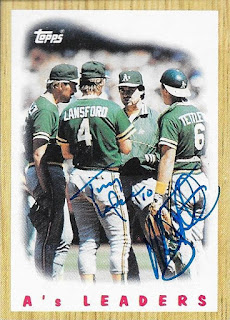 I dropped the ball a few months ago when I sent to a private signing with Mickey Tettleton on SCN.  I sent a couple cards and was all excited because I had already gotten his 1987 Topps.  I completely missed that he is on this 1987 Topps A's team leaders card.  I already knew that I messed up by not sending it to Carney Lansford.  So, I took advantage of another signing that popped up, and was able to get Tettleton.  I'll have to keep an eye out for another Lansford signing, as well as Dave Von Ohlen (the guy on the left).

It'll be cool if you can track down the last two players. Best of luck!