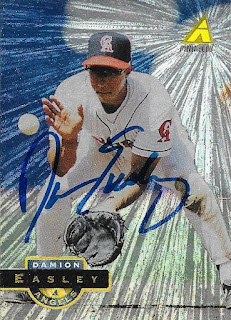 So, this one definitely took a while.  I had forgotten about all of the cool cards that I sent TTM to Damion Easley, so when this one finally made its way back to me, I was really excited to see the cards that fell out of the envelope.

I actually robbed this 1994 Pinnacle from a set my mom had started to put together back in 1994.  She gave me the album at one point, and I saw this Easley in there when I was just about to send to him.  I'm actually glad I pulled from the set, because this card looks spectacular, and will be a really cool addition to my autograph album.  Thanks Mom! 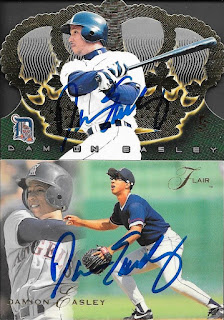 I also got a Pacific Crown Royale signed (top, crown shaped card) which looks pretty cool.  The 1993 Flair beneath it also is very sharp. 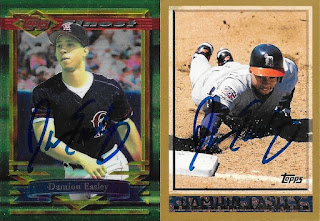 I love the old 1994 Finest design (left).  It turned out great.  I also added a 1998 Topps because I love the dirt shot of the card.  Those are some nice shots on cards, when you get a good portion of the card taken up by the dirt.  Those have always been some of my favorites.