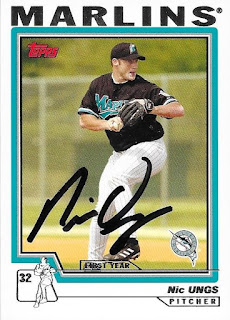 This 2004 Topps Nic Ungs was out for TTM for quite a while, and finally came back signed.  I had sent this earlier in the year, and well before I had picked up my partial set of 2004 Topps that should now see some successes come in and pump up the number of 04s I have in my album.

The card came out well, with the black Sharpie fitting nicely with his uniform.

Ungs (b. 1979) was a 12th round pick in 2001 by the Marlins out of the University of Northern Iowa.  He didn't make it to the majors, having spent 10 seasons in the minors, and some various other leagues.  His career record across MiLB was 71-56 with a 3.64 ERA and 769 strike outs.  Fairly decent numbers.  Had he come along maybe 10 years later, he might have cracked the Marlins MLB squad.

I mailed to Ungs on January 2 and got the card back on November 2, for a 304-day TAT.
Posted by William Regenthal at 5:28 PM

Never even heard of this guy! Congrats on the TTM success.

That's why I like to do this. Lets folks know about some of the forgotten and/or unknown players from the past. Thanks for reading.